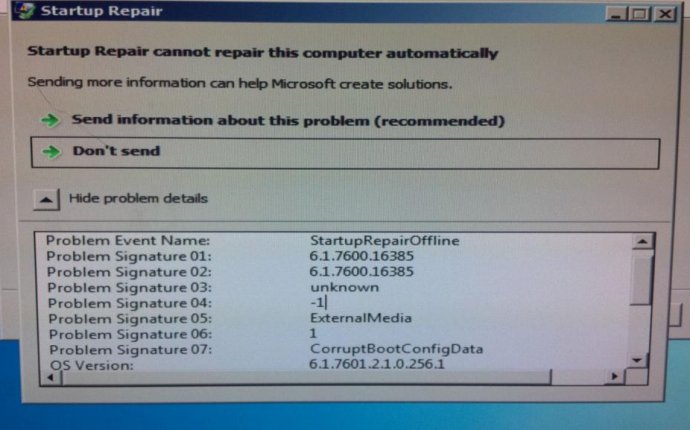 Sometimes the startup repair won’t able to repair your computer’s windows and showing you the “Startup Repair Cannot Repair This Computer Automatically” error with the description like this:

That’s not compulsory the startup repair will definitely fix your problem because most of the time your windows got corrupted in really bad condition and that’s why it forgot its own boot volume.

The second reason which also could be possible is, your startup repair can’t able to repair those files which need to be replaced because of some minor fault in your previously installed windows.

So, both reasons can be possible and the bad part about this error is we can’t able to identify why this problem is occurring in your PC by which one of these reasons.
That’s why you‘ll need to troubleshoot it step by step to find and fix the real problem and I’m gonna help you out to fix this problem by your own.

An active partition is a partition in your computer’s hard disk which known as bootable partition who contain your PC’s operating system. Normally only one partition can be active at the time like c: drive where mainly our windows is installed.

Sometimes that partition got inactive due to some reasons and we’ll need to reactive it in order to show it on recovery options.

First open cmd on your computer’s screen by pressing the Shift + F10 Key and then type the command what I’m listed below:

This command will start disk part utility in your command prompt. When diskpart will start you’ll able to see “DISKPART>” on the left side.

This will list all of your connected drives in your computer.

In this step, we’re selecting our main hard drive where your window is installed. In my case, I’m selecting disk 0 because that’s the only drive shown in my cmd and that’s the also one where my OS is installed.

This command will show you all the partitions created in that disk what you’ve selected.

That will make your partition active.

Now restart your computer and open the system recovery options again to see the changes in it.

The MBR or I say master boot recode is the most important data structure on the disk which is mainly created when we make a partition in our hard disk to install windows.

It’s possible your boot volume got corrupted by some recently installed Software, Viruses or Windows/Software updates and it’s better to get it repair as soon as possible So, now we are using cmd command to repair our hard disk boot volume and now you’ll just need a cmd to type the command into the command prompt.

You’ll need to find your windows drive letter in that list, like mine is 29 GB D: drive.

Command 7# – Bootrec /rebuildbcd {Skip this command only for the first time and use it if skipping this won’t works after testing but definitely use the chkdsk command written below in every try.}

After “chkdsk” command completes, just restart your computer and I hope your problem is solved.

First open cmd on your computer’s screen by pressing the Shift + F10 Key and then type the command what I’m listed below and follow the other instructions too:

When you opened your command prompt it will show you the path “X:\windows\system32>” by default because of your setup using an internal ram disk to open itself.

This command will change’s your cmd path to the C:\ Drive and then you can easily check that’s my windows driver or not by using the second command which is:

After dir command if your cmd shows you some directory listed in it, which showing you Program Files, Users, and Windows folders, if you’ve did found your system drive perfectly and “C:/ Drive” is your windows drive and you can skip the next couple paragraphs where are written about changing drives path to the second partition.

If your cmd shows you “volume in drive c is system reserved” just like the picture given below then it’s not your windows driver and now you’ll need to use the “d:” in your next command to open the D Driver in the command prompt and just like the above one use the “dir” command again to confirm that does “D:\ Driver” is the one who’s having my windows installed in it or not.

Mine one is d:\ and If you still won’t getting the directory in your D Drive also, then now change your drive letter to E, F or some other letter until you’ve found where the system drive is located.

Now type your windows config folders path into the cmd to open it and after that use the dir command again to find which files and folders are stored in it.

After using the dir command if your command prompt shows you some files and folder who’s having these names exist in that config folder, then everything is great just move to the next command.

So, use these command

If it asks you to overwrite existing files, just type A and press enter to allow all backups to be overwritten.

Now let’s check if we can use the automatic Windows backups to restore your corrupted registry:

After the above one commands now you’ll need to check does that directory what you’ve opened is having these files stored in it with the file name.